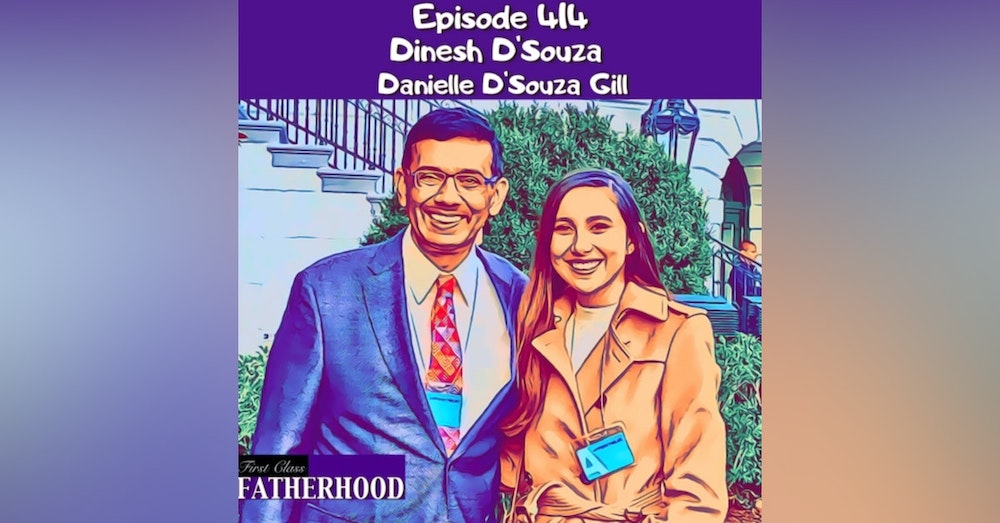 Episode 414 Dinesh D’Souza and Danielle D’Souza Gill join me for the first ever Father/Daughter interview on First Class Fatherhood. Dinesh D’Souza is a First Class Father, Best Selling Author , scholar, and public intellectual, and has also become an award-winning filmmaker. Dinesh has been named one of America’s most influential conservative thinkers by the New York Times Magazine. The World Affairs Council lists him as one of the nation’s 500 leading authorities on international issues, and Newsweek cited him as one of the country’s most prominent Asian-Americans. His daughter Danielle D’Souza Gill is a graduate from Dartmouth College, she has filmed videos for PragerU, has been a Turning Point USA ambassador, and been on various tv and radio networks including Fox News, One America, Newsmax, and Salem Radio. She is the youngest Advisory Board member of Women for Trump, a coalition of Donald J. Trump’s campaign. The Choice: The Abortion Divide in America, is her second book. In this Episode, Dinesh shares his Fatherhood journey, how he handled things when his daughter became old enough to start dating and his discipline style as a dad with Danielle right there to tell her side of the story. Dinesh discusses his new book The United States Of Socialism as well as his new documentary Trump Card. He describes the impact of the fatherless and why we must strengthen our Nuclear Family Units. Danielle discuss her new book and men are affected by abortion. She gives advice for couples who are faced with an unwanted pregnancy. Dinesh describes the state of colleges in America, he offers some great advice for new or about to be Dads and more! TRUMP CARD - https://www.dineshdsouza.com/films/trump-card/ UNITED STATES OF SOCIALISM - https://www.amazon.com/United-States-Socialism-Behind-Evil/dp/1250163781/ref=mp_s_a_1_3?dchild=1&keywords=united+states+of+socialism&qid=1603686290&sprefix=united+states+of+&sr=8-3 THE CHOICE: THE ABORTION DIVIDE IN AMERICA - https://www.amazon.com/61-Million-Counting-Abortion-Epidemic/dp/1546099867/ref=mp_s_a_1_3?dchild=1&keywords=the+choice+the+abortion+divide+in+america&qid=1603686445&sprefix=the+choice+&sr=8-3 MANSCAPED - https://www.manscaped.com Promo Code - Father Save 20% + Free Shipping Subscribe to First Class Fatherhood on YouTube - https://www.youtube.com/channel/UCCD6cjYptutjJWYlM0Kk6cQ More Ways To Listen - https://linktr.ee/alec_lace First Class Fatherhood Merch - https://shop.spreadshirt.com/first-class-fatherhood-/we+are+not+babysitters-A5d09ea872051763ad613ec8e?productType=812&sellable=3017x1aBoNI8jJe83pw5-812-7&appearance=1 Follow me on instagram - https://instagram.com/alec_lace?igshid=ebfecg0yvbap For information about becoming a Sponsor of First Class Fatherhood please hit me with an email: FirstClassFatherhood@gmail.com --- Support this podcast: https://anchor.fm/alec-lace/support