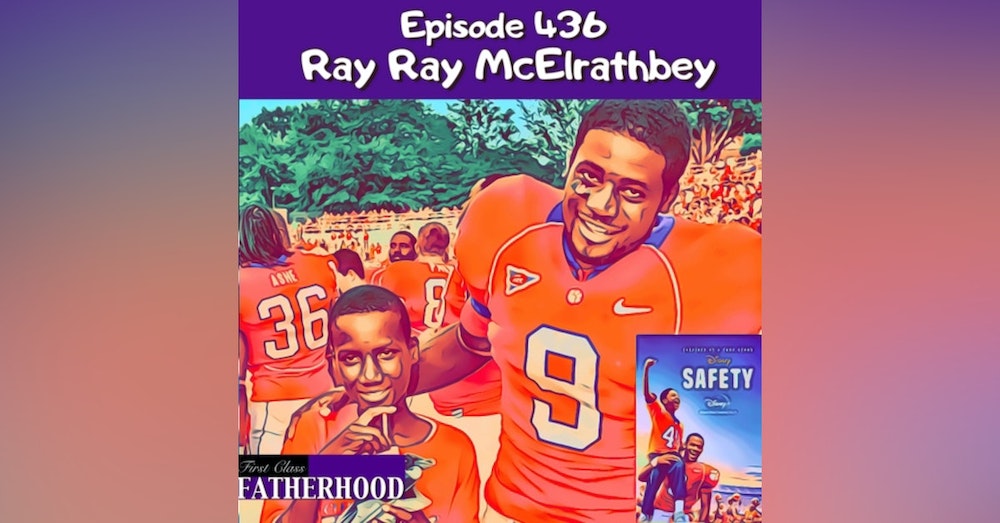 Episode 436 Ray Ray McElrathbey is a First Class Father whose life story was made into a Disney film titled SAFETY. The film is set in 2006 when Ray’s mother was being moved to a mandatory rehab facility and Ray took custody of his younger brother Fahmarr. He secretly hid his brother on the Clemson University campus. Once friends and teammates discovered what was going they began helping Ray which led to an NCAA investigation. After giving a heartfelt speech, the board ultimately decides to allow Ray and Fahmarr all the necessary benefits needed. The film is now streaming on Disney Plus. Ray is now a Father with a biological son of his own and owns a trucking company. In this Episode Ray shares his Fatherhood journey from raising his siblings to raising a child of his own. He discusses the film SAFETY and how it came to be made by Disney. He describes the relationship he has with his mother today and how she is doing. He talks about the father figures he had in his life growing up. He mentions his Ray Ray Safety Net Foundation and tells us his plans for the future. He offers some great advice for new or about to be Dads and more! SAFETY - https://disneyplus.com/movies/safety/60yXP18CCjFo?sharesource=iOSI RAY RAY SAFETY NET FOUNDATION - https://m.facebook.com/RayRaySafetyNet/ AMERICAN TRAITOR - https://www.amazon.com/American-Traitor-Pike-Logan-Novel-ebook/dp/B086SYNG85 Sign Up To Drive Uber - https://partners.uber.com/i/zgau5aj6d Uber Promo Code: 99N9K Subscribe to First Class Fatherhood on YouTube - https://www.youtube.com/channel/UCCD6cjYptutjJWYlM0Kk6cQ More Ways To Listen - https://linktr.ee/alec_lace First Class Fatherhood Merch - https://shop.spreadshirt.com/first-class-fatherhood-/we+are+not+babysitters-A5d09ea872051763ad613ec8e?productType=812&sellable=3017x1aBoNI8jJe83pw5-812-7&appearance=1 Follow me on instagram - https://instagram.com/alec_lace?igshid=ebfecg0yvbap For information about becoming a Sponsor of First Class Fatherhood please hit me with an email: FirstClassFatherhood@gmail.com --- Support this podcast: https://anchor.fm/alec-lace/support