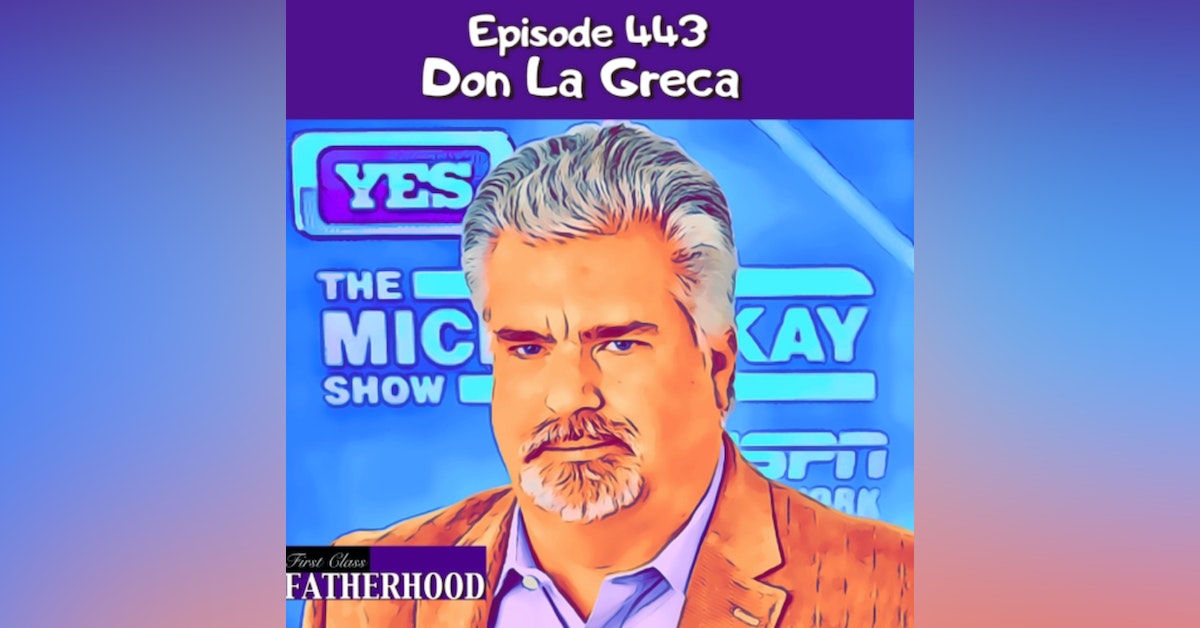 Episode 443 Don La Greca is a First Class Father and Co-Host of “The Michael Kay Show”. The show is now heard weekdays on 98.7 FM ESPN New York and on Sirius XM satellite radio from 3 to 7 p.m. "The Michael Kay Show" is also simulcast on the YES Network. He has been part of the Kay show since 2002. Don has been around the sports radio industry for years. He started at Sports Phone, where he updated scores and covered all nine local pro teams. He then worked as a Sports anchor at 1010 WINS. Don La Greca has been with ESPN New York since its start and was actually the first voice listeners heard when the station launched on September 3, 2001. He now Co-Hosts a new YouTube show, “It’s A La Greca Show”! with his brother Dave. They are speaking candidly about important topics beyond wrestling and sports. Once a week, Dave and Don will talk about pop culture, music, 80’s movies and TV shows, food, cars and game shows. In this Episode, Don shares his Fatherhood journey which includes becoming a Father of twins at 49 years old. He discusses how becoming a Dad has changed him as a radio host which now includes fewer “La Greca rants”. He describes how “The Michael Kay Show'' had to pivot during the pandemic when there were no sports to cover for four months. He talks about how the twins have altered his sleeping habits. He tells us about his new show, “It’s A La Greca Show”. He offers some great advice for new or about to be Dads and more! It’s A La Greca Show - https://youtube.com/channel/UCk1JoFe-QYzNvBiT61B8VVw MY PILLOW - https://www.mypillow.com Promo Code: Fatherhood Save Up To 66% Off 1-800-875-0219 More Ways To Listen - https://linktr.ee/alec_lace First Class Fatherhood Merch - https://shop.spreadshirt.com/first-class-fatherhood-/we+are+not+babysitters-A5d09ea872051763ad613ec8e?productType=812&sellable=3017x1aBoNI8jJe83pw5-812-7&appearance=1 Follow me on instagram - https://instagram.com/alec_lace?igshid=ebfecg0yvbap For information about becoming a Sponsor of First Class Fatherhood please hit me with an email: FirstClassFatherhood@gmail.com --- Support this podcast: https://anchor.fm/alec-lace/support