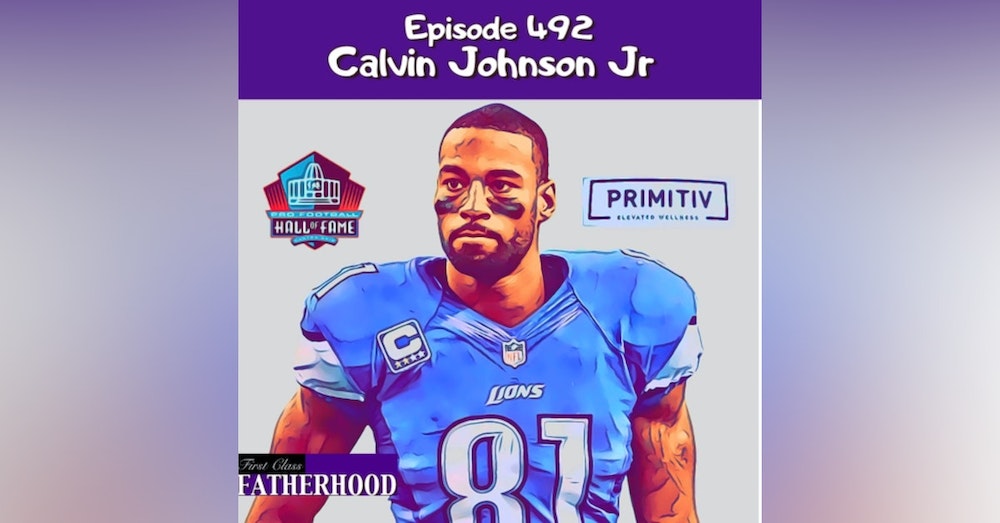 Episode 492 Calvin Johnson Jr is a First Class Father and Hall of Fame NFL wide receiver known as Megatron. Calvin is a part of the Pro Football Hall of Fame class of 2021 and will be enshrined in Canton, Ohio later this summer. Calvin was the #2 overall pick of the 2007 NFL Draft out of Georgia Tech. He was drafted by the Detroit Lions and would go on to play his entire 9 year NFL career with them. Calvin and his teammate, Rob Sims, began a Cannabis company called Primitiv. In 2008, Calvin founded the Calvin Johnson Jr Foundation which is dedicated to the education, training, and social development of at-risk youth, along with providing financial assistance to community organizations. In this Episode, Calvin shares his Fatherhood journey which includes three sons. He discusses why he began his Cannabis company, Primitiv. He describes his bedtime routine with his three boys. He talks about his Faith and it’s importance in raising his kids. He gives his opinion on young kids playing tackle football. He tells us why he ended up on Dancing With The Stars and what that experience was like. He mentions his upcoming enshrinement in the Pro Football Hall of Fame and who will be introducing him. He offers some great advice for new or about to be Dads and more! Subscribe to First Class Fatherhood and watch on YouTube - https://www.youtube.com/channel/UCCD6cjYptutjJWYlM0Kk6cQ?sub_confirmation=1 SPONSORS: SeatGeek - https://seatgeek.com Promo Code: FirstClass Save: $20 off tickets MY PILLOW - https://www.mypillow.com Promo Code: Fatherhood Save Up To 66% Off 1-800-875-0219 More Ways To Listen - https://linktr.ee/alec_lace First Class Fatherhood Merch - https://shop.spreadshirt.com/first-class-fatherhood-/we+are+not+babysitters-A5d09ea872051763ad613ec8e?productType=812&sellable=3017x1aBoNI8jJe83pw5-812-7&appearance=1 Follow me on instagram - https://instagram.com/alec_lace?igshid=ebfecg0yvbap For information about becoming a Sponsor of First Class Fatherhood please hit me with an email: FirstClassFatherhood@gmail.com --- Support this podcast: https://anchor.fm/alec-lace/support