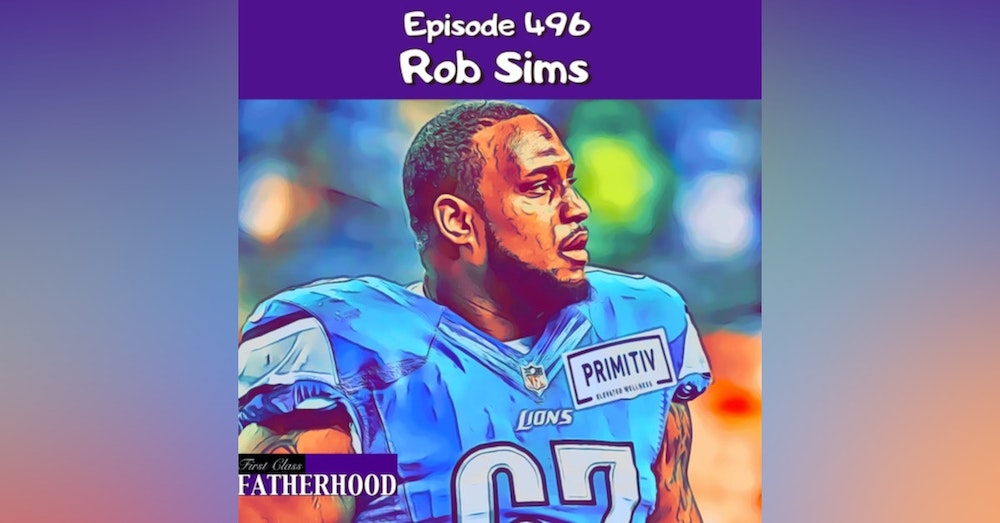 Episode 496 Rob Sims is a First Class Father and former NFL Offensive Guard. Rob was drafted by the Seattle Seahawks in the 2006 NFL Draft after playing his college football at Ohio State where he won the National Championship. Rob finished his NFL career with the Detroit Lions in 2014. Rob and his Lions teammate, Calvin Johnson, launched a cannabis business called PRIMITIV. They also formed a partnership with Harvard University to support medical cannabis research. You can listen to my interview with Calvin Johnson back on Episode 492 of the podcast. In this Episode, Rob shares his Fatherhood journey which includes three children. He talks about his father, former NFL Defensive Tackle Mickey Sims and describes the impact of his passing. He discusses the values he hopes to instill in his kids growing up. He talks about PRIMITIV and why he and Calvin Johnson launched the cannabis business. He gives his opinion on young kids playing tackle football and what age he started playing. He offers some great advice for new or about to be Dads and more! Subscribe to First Class Fatherhood and watch on YouTube - https://www.youtube.com/channel/UCCD6cjYptutjJWYlM0Kk6cQ?sub_confirmation=1 SPONSORS: SeatGeek - https://seatgeek.com Promo Code: FirstClass Save: $20 off tickets MY PILLOW - https://www.mypillow.com Promo Code: Fatherhood Save Up To 66% Off 1-800-875-0219 More Ways To Listen - https://linktr.ee/alec_lace First Class Fatherhood Merch - https://shop.spreadshirt.com/first-class-fatherhood-/we+are+not+babysitters-A5d09ea872051763ad613ec8e?productType=812&sellable=3017x1aBoNI8jJe83pw5-812-7&appearance=1 Follow me on instagram - https://instagram.com/alec_lace?igshid=ebfecg0yvbap For information about becoming a Sponsor of First Class Fatherhood please hit me with an email: FirstClassFatherhood@gmail.com --- Support this podcast: https://anchor.fm/alec-lace/support