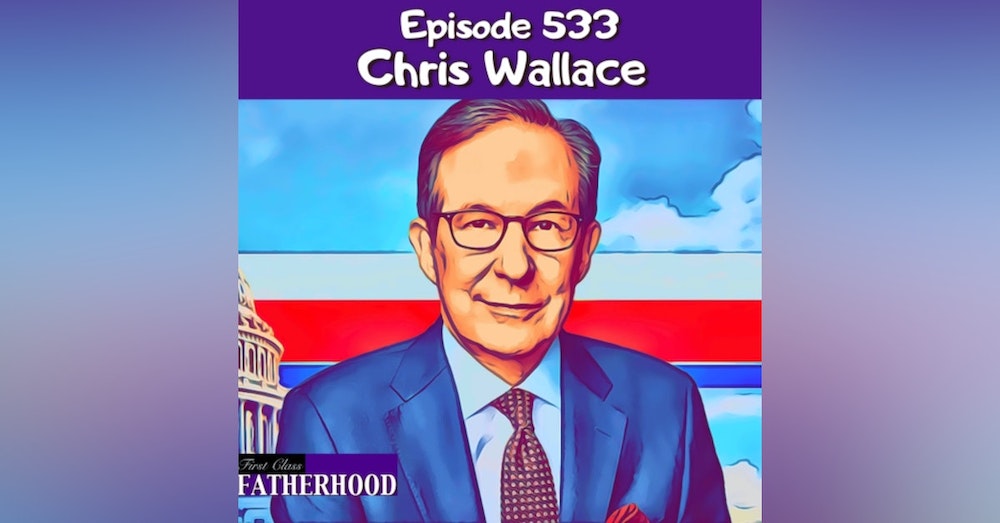 Episode 533 Chris Wallace is a First Class Father and Legendary Journalist and News Anchor. He is the host of Fox News Sunday, a position he has held since 2003. He is well known for his in-depth interviews with US Presidents such as Barack Obama and Donald Trump as well as other political leaders such as Vladimir Putin. Chris has won every major broadcast news award, including three Emmys, the Peabody Award and the Dupont-Columbia Silver Baton Award. Some of his previous positions include anchor for NBC Nightly News and host of Meet the Press, and ABC anchor for Primetime Thursday and Nightline. He was chosen to be the moderator for the final Presidential debate of 2016 between Hillary Clinton and Donald Trump and was chosen again to moderate the first Presidential debate of 2020 between Donald Trump and Joe Biden. He has had a career that spans five decades and followed in the footsteps of his father, 60 Minutes correspondent Mike Wallace. In this Episode, Chris shares his Fatherhood journey which includes six kids. He discusses the Fatherless Crisis and its impact on the country. He describes his discipline style as a Dad and the values that were important for him to instill in his kids. He talks about his new book, COUNTDOWN BIN LADEN, which is the second installment of his Countdown series. He offers some great advice for new or about to be Dads and more! On October 7th Fox News Channel is celebrating its 25th Anniversary!! Be sure to checkout all of my interviews with Fox News Dads including: Sean Hannity, Jesse Waters, Pete Hegseth, Stuart Varney, Will Cain, Charles Payne, Todd Piro, John Roberts, Brian Kilmead and more! Countdown Bin Laden: The Untold Story of the 247-Day Hunt to Bring the Mastermind of 9/11 to Justice - https://www.amazon.com/Countdown-bin-Laden-Mastermind-Wallaces/dp/1982176520 Subscribe to First Class Fatherhood and watch on YouTube - https://www.youtube.com/channel/UCCD6cjYptutjJWYlM0Kk6cQ?sub_confirmation=1 SPONSORS: DML CBD - https://dmlcbd.com Promo Code: Father SeatGeek - https://seatgeek.com Promo Code: FirstClass Save: $20 off tickets MY PILLOW - https://www.mypillow.com Promo Code: Fatherhood Save Up To 66% Off 1-800-875-0219 More Ways To Listen - https://linktr.ee/alec_lace First Class Fatherhood Merch - https://shop.spreadshirt.com/first-class-fatherhood-/we+are+not+babysitters-A5d09ea872051763ad613ec8e?productType=812&sellable=3017x1aBoNI8jJe83pw5-812-7&appearance=1 Follow me on instagram - https://instagram.com/alec_lace?igshid=ebfecg0yvbap For information about becoming a Sponsor of First Class Fatherhood please hit me with an email: FirstClassFatherhood@gmail.com --- Support this podcast: https://anchor.fm/alec-lace/support