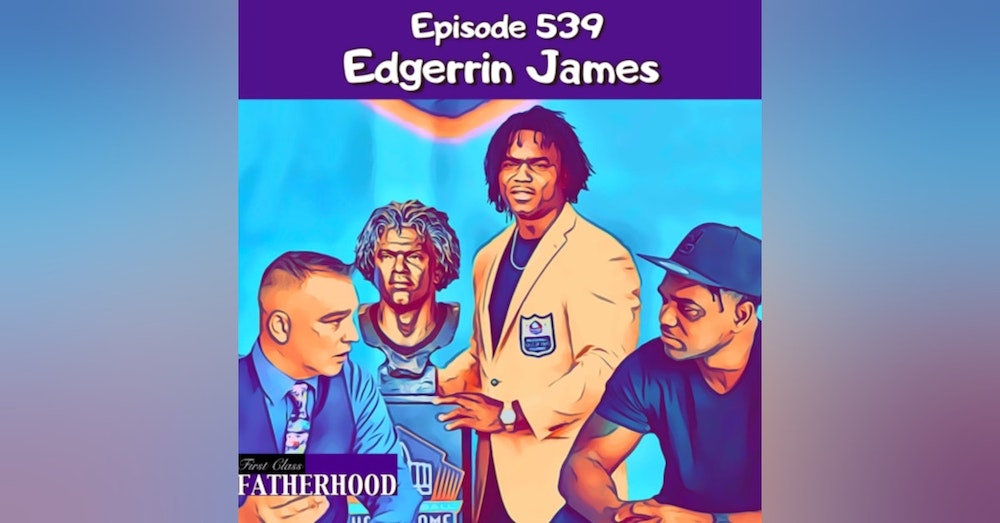 Episode 539 Edgerrin James is a First Class Father and NFL Legend. He is a Pro Football Hall of Fame Running Back who was drafted with the 4th overall pick of the 1999 NFL Draft by the Indianapolis Colts. He played his college football at the University of Miami where he would later be inducted into the University of Miami Sports Hall of Fame. Edgerrin played 11 seasons in the NFL. He was the Offensive Rookie of the year in 1999, he earned four Pro Bowl selections, he led the NFL in rushing twice, and he is 13th on the all-time NFL rushing list. He was elected to the Pro Football Hall of Fame as a member of the Class of 2020 and was enshrined in canton this past summer. I had the honor of sitting down with Edgerrin James to conduct this interview live from Miami. In this Episode, Edgerrin shares his Fatherhood journey which includes six children. He discusses how his mother made it a point to surround him with positive male role models growing up. He describes the legacy he wants to leave behind as a Father. He talks about the importance of giving each of his six kids some one on one time. He expresses how awesome it was to share the experience of being enshrined in the Pro Football Hall of Fame with his kids. He offers some great advice for new or about to be Dads and more! Subscribe to First Class Fatherhood and watch on YouTube - https://www.youtube.com/channel/UCCD6cjYptutjJWYlM0Kk6cQ?sub_confirmation=1 SPONSORS: DML CBD - https://dmlcbd.com Promo Code: Father SeatGeek - https://seatgeek.com Promo Code: FirstClass Save: $20 off tickets MY PILLOW - https://www.mypillow.com Promo Code: Fatherhood Save Up To 66% Off 1-800-875-0219 More Ways To Listen - https://linktr.ee/alec_lace First Class Fatherhood Merch - https://shop.spreadshirt.com/first-class-fatherhood-/we+are+not+babysitters-A5d09ea872051763ad613ec8e?productType=812&sellable=3017x1aBoNI8jJe83pw5-812-7&appearance=1 Follow me on instagram - https://instagram.com/alec_lace?igshid=ebfecg0yvbap For information about becoming a Sponsor of First Class Fatherhood please hit me with an email: FirstClassFatherhood@gmail.com --- Support this podcast: https://anchor.fm/alec-lace/support