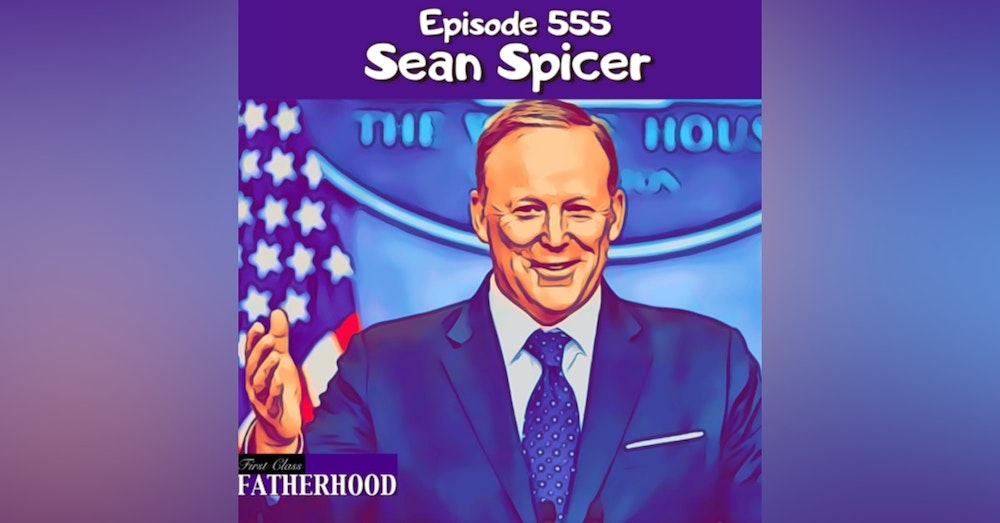 Episode 555 Sean Spicer is a First Class Father and former White House Press Secretary. He currently hosts a political talk show on Newsmax TV. Sean served as the 30th White House Press Secretary and as White House Communications Director under President Donald Trump in 2017. Prior to that, Sean was communications director of the Republican National Committee and its chief strategist. Sean was a contestant on season 28 of Dancing with the Stars where he advanced to the quarter finals. Sean is a New York Times Bestselling Author who has a new book available now titled, RADICAL NATION: Joe Biden and Kamala Harris’s Dangerous Plan for America. In this Episode, Sean shares his fatherhood journey which includes two children. He discusses the Fatherless Crisis and the importance of father figures and strong families. He describes his concerns of being a public figure while being a father. He talks about his kids reaction to his performance on Dancing with the Stars. He tells us about his new book, RADICAL NATION: Joe Biden and Kamala Harris’s Dangerous Plan for America. He offers some great advice for new or about to be Dads and more! RADICAL NATION: Joe Biden and Kamala Harris’s Dangerous Plan for America - https://www.amazon.com/RADICAL-NATION-Harriss-Dangerous-America/dp/1630061719/ref=mp_s_a_1_3?crid=1ZK9FQMR94X11&keywords=radical+nation+sean+spicer&qid=1636348346&sprefix=radical+%2Caps%2C143&sr=8-3 Subscribe to First Class Fatherhood and watch on YouTube - https://www.youtube.com/channel/UCCD6cjYptutjJWYlM0Kk6cQ?sub_confirmation=1 SPONSORS: SeatGeek - https://seatgeek.com Promo Code: FirstClass Save: $20 off tickets MY PILLOW - https://www.mypillow.com Promo Code: Fatherhood Save Up To 66% Off 1-800-875-0219 More Ways To Listen - https://linktr.ee/alec_lace First Class Fatherhood Merch - https://shop.spreadshirt.com/first-class-fatherhood-/we+are+not+babysitters-A5d09ea872051763ad613ec8e?productType=812&sellable=3017x1aBoNI8jJe83pw5-812-7&appearance=1 Follow me on instagram - https://instagram.com/alec_lace?igshid=ebfecg0yvbap For information about becoming a Sponsor of First Class Fatherhood please hit me with an email: FirstClassFatherhood@gmail.com --- Support this podcast: https://anchor.fm/alec-lace/support